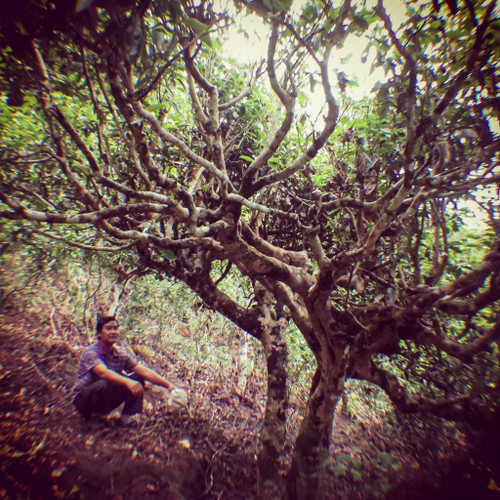 Pu'er is one of the most enigmatic categories of tea. Produced exclusively in Yunnan Province from an ancient race of tea plants known as Big Leaf Tea, Pu'er may be aged or fresh, fermented or green, pressed or loose. This flight is designed to sample the breadth of fermentation styles, source materials, and vintages of teas available from the Li family of Nannuo Mountain.

For Sheng (raw/unfermented) Pu'er, we have fresh and aged loose Shengs. The Bama Sheng is from 2019. Sourced from the young, seed-propagated trees of a specific patch, called Bama, known for its tea, this characterizes the taste and feeling of high-quality fresh Sheng. By contrast, we have an aged gǔ shù古樹 (ancient tree) Sheng Pu'er - an old tea from old trees - which is a blend of various patches on the mountain. By trying these two we get a sense of the effects of aging on the leaves themselves, while also grasping the effects of the age of the trees on the tea.

We also include two different types of Shu (ripe/fermented) Pu'er. The first, Vanilla Obscura, is a 2015 small-pile fermented tea, meaning that the leaves are moistened and turned to aid their even decomposition. It exhibits the earthy, robust character usually associated with Shu Pu'er, which for the most part is produced via a similar technique. The second is Ju Ju Bee, which is produced in the much smaller, more artisan Yuan Sheng Tuo style. In this style, the tea is not turned, resulting in a more complex tea that better approximates the flavor of aged Sheng.

Included in this flight: