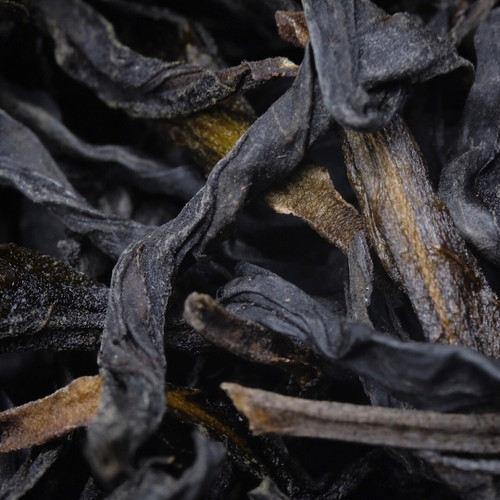 Spring Duck Shit (鴨屎香, Yā Shǐ Xiāng, "Duck Shit Fragrance") - Of the many varieties--and there are many--of Phoenix oolongs, Yā Shǐ 鴨屎 ("Duck Shit") bears the distinction of having the most entertaining name. It’s curious moniker has an equally entertaining story behind it. The process of breeding a new variety of Phoenix oolong is time and labor intensive and requires an exceptional degree of skill and knowledge. Mother plants of a new dān cōng 單樅 ("single bush") are raised to an age of 7 to 10 years before cuttings can be taken from them for the purpose of cloning. Each year only a limited number of clones may be propagated without causing excessive damage to the mother plant. The young clones must be raised for two to five years before they yield a substantial harvest. From the time a farmer decides to breed a new variety to the time that they have pounds of tea ready for the market 20 years may have passed. The pay-off for all of this effort and patience is fame and fortune: if the tea is good, its reputation will quickly spread amongst Phoenix oolong lovers who are often willing to pay high prices for rare and novel varieties of tea. However it is not uncommon for unscrupulous tea farmers, seeing their neighbors hard at work breeding a new variety to “steal” the new plant by surreptitiously taking their own cuttings of the mother plant and propagating their own clones. The farmer who developed the tea now known as Duck Shit originally named his new variety Wū Jiǎo Zǎi 烏腳仔 (“the dark legged one”) but, fearing that his neighbors would be tempted to steal the plant, he renamed it with the off-putting epithet, Yā Shǐ (“Duck Shit”) in the hopes that it would discourage tea thieves. Despite its curious name or perhaps in part because of it, this exceptionally unique and flavorful Phoenix oolong has become one of the most popular varieties. Duck Shit is an extremely fragrant varietal with prominent notes of honeysuckle, jasmine and sweet almond. This tea is charcoal roasted by hand in the traditional style. A truly unique tea with an unforgettable name.