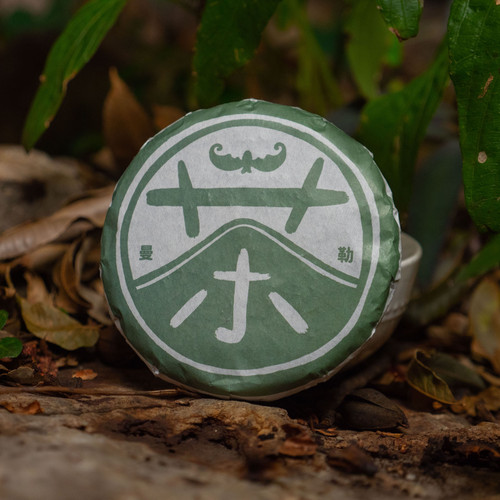 Man Le Sheng Pu'er Mini Bing ( 曼勒生小餅, Màn Lē Shēng Xiǎo Bǐng, "Man Le Raw Small Bing") - This is a cake of tea from Man Le, Li Shulin's new home. He relocated there after his home on Nannuo Mountain was destroyed by a fire in 2021. While he still maintains his plots on Nannuo Mountain and is still making tea from them, he has also begun using the local Man Le plants to make Sheng and Shu Pu'er, as well as Red tea and White tea.

This cake is made from Man Le Sheng Pu'er processed in the traditional style, involving a lower temperature Sha Qing and a Rou Nian (massaging) step, producing a tea with slightly higher oxidation than a standard green tea. The result is a tea that is darker in color, with less bright floral fragrance but more depth and greater potential to improve with age.

What's really remarkable is how different these Man Le teas taste from their Nannuo counterparts. Despite being processed in the same way by the same person, within eyeshot of Nannuo mountain, this tea has the unusual tasting notes of fresh-opened canned lychee, freshly-laundered linens, and passion fruit seed. It has a gentle bitterness with a strong, lingering hui gan (returning sweetness) and uplifting qi.

This mini bing includes 100g of pressed tea. The base color of the wrapper is green, indicating that it is a Sheng Pu'er. The ring and bat are white, indicating that this tea is made using standard leaves.