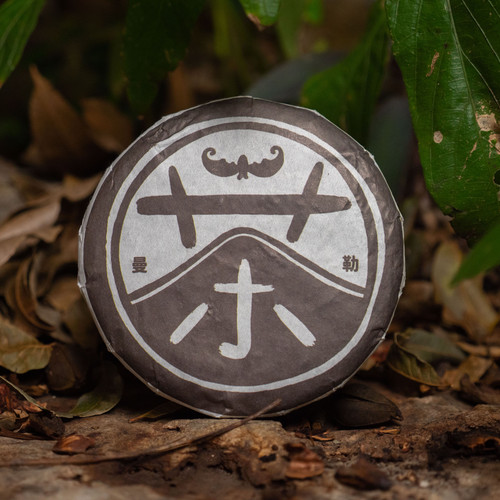 Man Le Shu Pu'er Mini Bing ( 曼勒熟小餅, Màn Lē Shú Xiǎo Bǐng, "Man Le Ripened Small Bing") - This is a cake of tea from Man Le, Li Shulin's new home. He relocated there after his home on Nannuo Mountain was destroyed by a fire in 2021. While he still maintains his plots on Nannuo Mountain and is still making tea from them, he has also begun using the local Man Le plants to make Sheng and Shu Pu'er, as well as Red tea and White tea.

This cake is fermented by Li Shulin using the Xiǎo Duī Zi 小堆子 ("Small Pile") technique. It has a dark, earthy profile of aged wood and pecan that will grow more complex over time.

This mini bing includes 100g of pressed tea. The base color of the wrapper is brown, indicating that it is a Shu Pu'er. The ring and bat are white, indicating that this tea is made using standard leaves.