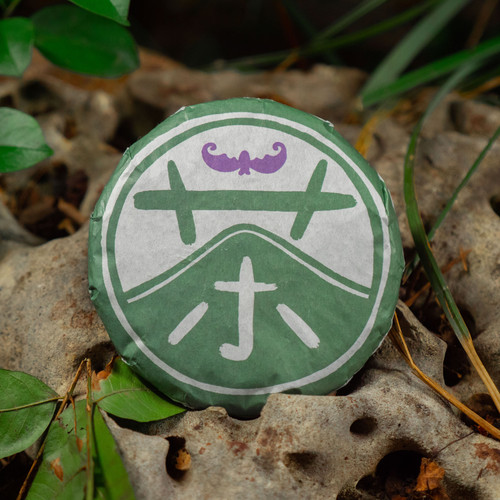 Purple Grace Sheng Pu'er Mini Bing (紫娟生小餅, Zǐ Juān Shēng Xiǎo Bǐng, "Purple Grace Sheng Mini Bing") - This tea is a purple breed of Pu'er. It was developed to meet the growing demand for the naturally occurring Zǐ Yá Chá 紫芽茶 ("Purple Bud Tea"). Prized for its exquisite color, powerful Qi, and high content of anthocyanins, Zǐ Yá enjoyed a surge in popularity in the mid 1990s, however its rarity makes it extremely expensive. Zǐ Juān 紫娟 (“Purple Grace”) is a cloned strain of large leaf varietal Pu’er that carries the purple leaf trait. It was bred from a mutant Zǐ Yá plant from Nannuo Mountain and a normal green Pu’er plant from the Menghai Tea Research Institute. It has a mellow but distinct flavor that follows within the profile of large leaf Sheng Pu’er but with a darker, slightly more floral fragrance and an aftertaste reminiscent of blueberries or currants. As it steeps, the dark leaves take on a blue-ish cast from the anthocyanin infusion, achieving a dark green color after 12 to 15 steepings. The color of the liquor ranges from mauve to maroon and even to a grayish purple; this in contrast to the green-gold usually associated with fresh Sheng Pu’er. Its Qi is bright, euphoric, and quite stimulating.

This mini bing includes 100g of pressed tea. The base color of the wrapper is green, indicating that it is a Sheng Pu'er. The bat is violet, indicating that this tea is made from Zǐ Juān 紫娟 ("Purple Grace") leaves.