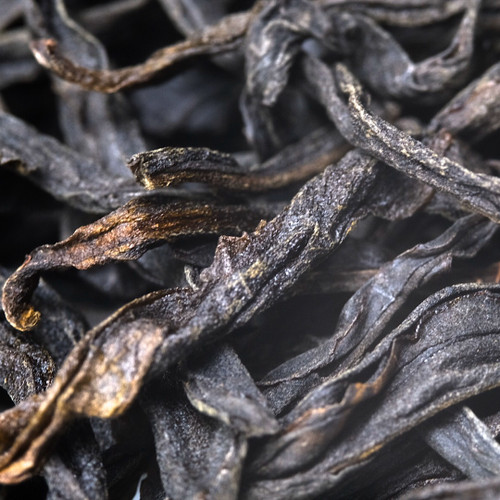 Chicken Cage Pole (雞籠杆, Jī Lóng Gān, "Chicken Cage Pole") is an obscure breed of Phoenix Oolong named for the shape of the mother tree, which has a reticulated structure and a thick-branched trunk reminiscent of a chicken cage. While uncommon in America, chicken cages are still regularly seen in China, often on the back of motorcycles in the countryside. Tea trees that are closer in proximity to the mother tree with respect to generations of clones are of higher quality and are more highly sought-after than clones of clones of clones. Being less-widely distributed than more common cultivars (we have not yet found anyone else in the region producing this tea other than A Long), this tea is grown from trees that are much closer to the mother plant than most standard grades. Notes of sesame oil and sushi salmon umami mixed with a bubblegum or starburst fruitiness and undertones of toasted corn. Taste of ripe starfruit upon sipping.