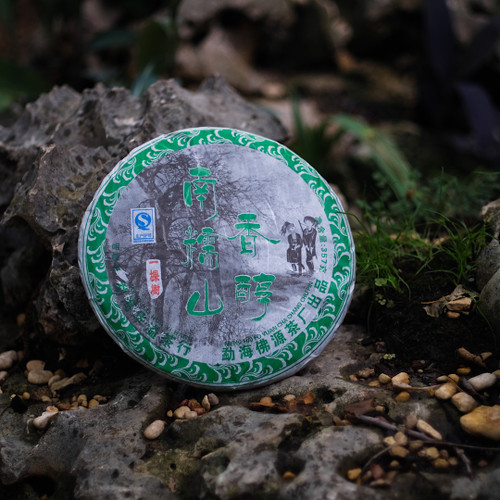 2013 Gu Shu Huang Pian Bing (古樹黃片餅, Gǔ Shù Huáng Piàn Bǐng, "Ancient Tree Yellow Leaves Bing") - There's a lot of information to unpack about this tea. Gǔ Shù 古樹 means "ancient tree" and refers to trees of advanced age whose leaves are of esteem. Ancient tree teas are prized for their complex and distinctive profiles but mostly for their Qi, what some people identify with the drug effect of tea. So - starting off, we have leaves from fancy ancient trees.

Then we come to the rest of the name, Huáng Piàn. Technically Huáng Piàn means "Yellow Slice," which in this case refers to leaves. If you run it through Google translate you will get a very different translation than "Yellow Leaves" which can only be explained by an in-depth social and linguistic exploration of Mandarin Chinese. Suffice it to say, Huáng Piàn, when referring to tea, signifies the old, mature leaves that are considered too coarse and unsightly to be included in the fine spring pluck. A tea bud can be considered to "ripen" and is most desirable before it opens, or when it has newly opened. A fully mature leaf can be said to be "overripe" from a marketing standpoint, but it makes fine tea.

Huáng Piàn wasn't generally something that people bought and sold until the last few decades - it has however been a favorite of Yunnan tea farmers for generations. It is mellower in flavor than pricier, early-spring teas.

So we have a tea that is valuable for being from ancient trees, and inexpensive for being from a late harvest and fully mature leaves. The wet leaves exhibit a musky fragrance, the early stages of fermentation, with notes of "grassy coffee", dried plum, and aged lumber. The flavor has tannic, leathery and oak notes, with a strong, smooth mouthfeel that extends deep into the throat and evokes a "cooling" sensation with repeated steepings. The Qi is clean, bright, and exceptionally grounding while being substantially stimulating at the same time.