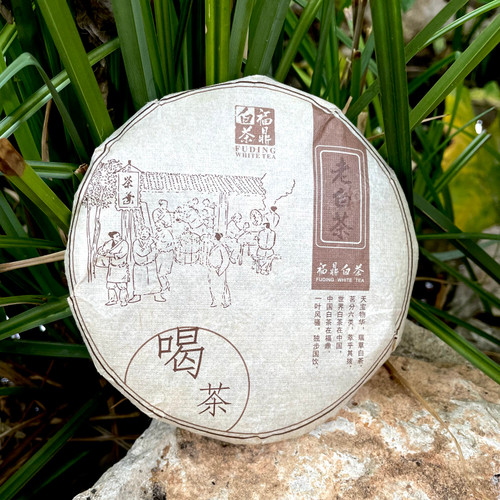 2014 Sugar Plum Shou Mei Mini Bing (糖梅壽眉小餅, Táng Méi Shòu Méi Xiǎo Bǐng, "Sugar Plum Longevity Eyebrow Mini Bing") - Aged white tea has a special place in our hearts at West China Tea. Once upon a time, I thought that I didn't like white tea, because all I'd ever had was some low-grade Silver Needle and some low-grade White Peony. In all cases, the tea I'd had was fresh. This persisted through my three years of living in Chengdu, in Western China, where white tea is not commonly enjoyed and where I had no real access or exposure to good white tea. It wasn't until I was introduced to aged white tea in the form of a 2005 White Peony Bing from Fuding that I truly began to appreciate this category. Unlike fresh, bud-heavy white teas such as Silver Needle, the leafier grades mature in flavor, depth, and character. I traced this White Peony Bing back to its source, a Fuding tea master named Li Yanmei, who lived in Xiamen. She had been collecting small-production cakes from tea farmers who were friends of her family for years. While tea farmers themselves do not generally focus on storing older vintages of tea, but will generally sell out their entire stock in a given year, Li had made a career out of sourcing fine white tea cakes and storing them in a cedar-lined room, designed for that purpose.

Of the three primary grades of Fuding white tea (Silver Needle , White Peony, and Longevity Eyebrow), Shòu Méi is the leafiest, and therefore matures the most quickly, achieving a rich, earthy profile with sweet honey and dried fruit overtones within a few years. In order to help people discover the magical world of aged white tea, we like to offer a small, exemplary, affordable bing of well-aged Shòu Méi at any given time. The exact vintage of this cake changes as previous years' batches run out, but we try to obtain a cake that is at least three years old. This is aligned with the idiom "One year, tea; Three years, medicine; Seven years, treasure" referring to the maturing of white tea. Though the year may change, these mini bings have been hand-selected by Li Yanmei and stored in her climate-controlled, cedar-lined warehouse since the year that they were pressed. Whether you are a white tea lover or you've never had aged white tea, these bings are a favorite at the tea house and a great daily drinker.