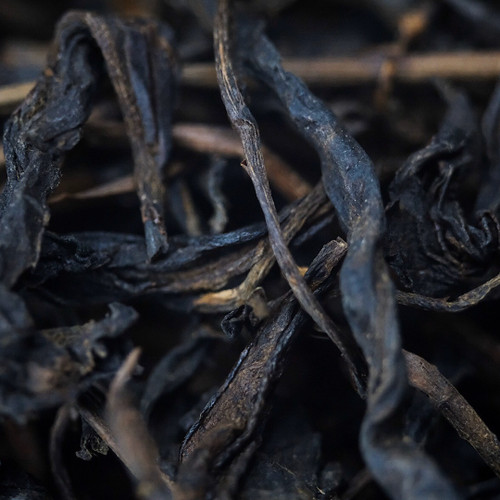 Early 1990s Kitchen Witch Gu Yu Cha (谷雨茶, Gǔ Yǔ Chá, "Grain Rain Tea") is a form of vernacular fermented tea from Guangxi province. The name Gǔ Yǔ means “Grain Rain” and refers to the late spring rainy season, which is when this tea is harvested. It is usually harvested from wild or feral plants that grow in and around the mountain farms of Guangxi. These local plants are not managed by tea farmers and are coursely harvested because this tea is intended primarily for consumption by the farmers. The resulting product is diffuse with a high proportion of twigs.

In its fresh state, Gǔ Yǔ Chá is essentially a green tea. It is traditionally stored in grain sacks in the rafters of farmhouse kitchens. These rural kitchens feature open architecture and wood burning stoves which produce continuous wood smoke that prevents the tea from molding in the extremely moist and humid Guangxi climate. Gǔ Yǔ Chá is rarely if ever seen for sale in tea markets. Despite its humble origins, this tea plays an essential role in the culture of Guangxi because it is the main ingredient in the ancient and iconic food Yóu Chá 油茶 ("Oil Tea"). This dish consists of dried Gǔ Yǔ Chá leaves fried in oil with salt, ginger, garlic, scallions, peanuts, and other ingredients pounded during the cooking process with a special wooden mallet until a rich roasted fragrance rises from the frying ingredients. Water is then added and the mixture brought to a boil creating a rich, flavorful broth. FInally, the Yóu Chá is strained and served in a bowl with more salt, scallions and peanuts. It is traditionally eaten for breakfast with a number of small side dishes.

When steeped as tea, aged Gǔ Yǔ Chá has an earthy, almost seafood flavor with a heavy minerality, pronounced oakwood notes, a fragrance of petrichor and a surprisingly bright, sweet aroma on the exhale. Gǔ Yǔ Chá is unique among Hei Chas in that it is consumed regularly by the people who produce it whereas most other Hei Cha is produced as an export commodity. As a result this tea is little-known outside of Guangxi. Its relative obscurity means that very old vintages can still be found in the hands of the farmers who produce it.

Zhang sent us two different samples on our last order, both from the early 1990's. We liked them both so we kept both - they're from different households and are distinguishable by one being "twiggier" than the other. We named the twiggy style one "Kitchen Witch" and leafy style one "Zao Shen" after the Chinese kitchen deity. Of the two, the twiggy is slightly more expensive and we also tend to like it better - it's slightly more sweet and substantial - but we love having the range and contrast of this unique tea.