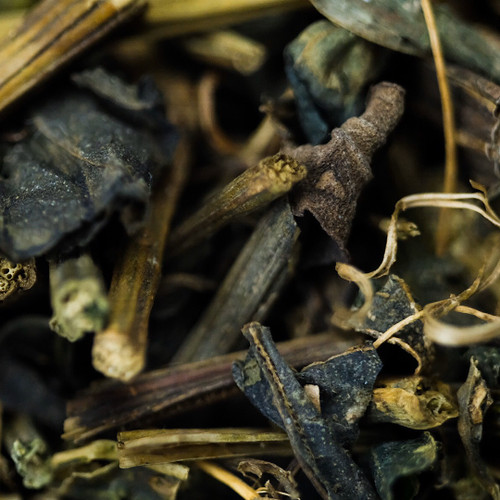 Jiao Gu Lan (絞股藍 , Jiǎo Gǔ Lán, "Sweet Ivy") Latin Name: "Gynostemma pentaphylum" Jiǎo Gǔ Lán is an herb native to Southeast Asia and Southwestern China. It grows as a vine and although its medicinal benefits have been observed anecdotally, it grows too far from the center of Han Chinese civilization to have been incorporated into the Chinese medical pharmacopoeia until recently. It has a distinctively sweet taste, while containing little actual sugar - similar to stevia or monkfruit - and was being researched as a potential non-caloric sweetener. It was during this research that it was discovered to contain many different gypenosides, a class of saponins also found in ginseng, although Jiǎo Gǔ Lán is not related to ginseng, but instead closely related to squashes and cucumbers. Combined with the strong association of Jiǎo Gǔ Lán use by long-lived populations in "centenarian villages" in the Chinese southwest, it has come be known as "Poor Man's Ginseng," or "Immortality Tea" and is used in herbal traditions as an adaptogen. As an herbal infusion, it has a beautiful green liquor, a woody flavor in its stems, and distinctively sweet leaves, with an invigorating - though not stimulating - Qi.