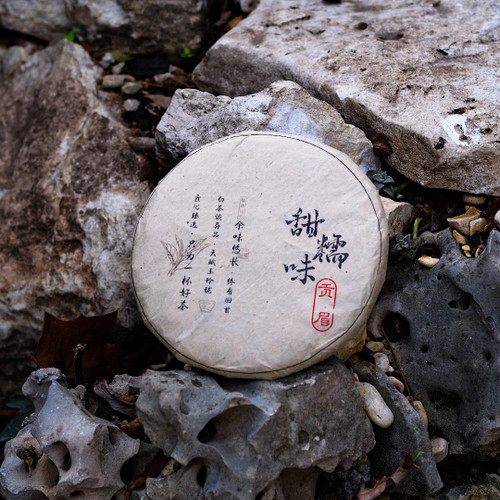 2013 Effulgence Gong Mei Bing (靈光貢眉白茶餅, Líng Guāng Gòng Méi Bái Chá Bǐng, "Holy Light Tribute Eyebrow White Tea Cake") is a 350 gram cake of Gong Mei from the collection of Li Yanmei. A tea farmer herself, Li is from Fuding, Fujian and grew up in a tea family. She curates a collection of aged small-farm white tea cakes made by her friends, relatives, and neighbors from her hometown. Most of our aged white tea that we have is sourced from her, as well as our silver needle which she grows.

At any given time we try to have at least one aged Fuding white in our catalog. From 2019-2020 we stocked a bing called Cumulus, which was a Shou Mei from 2012, but we ran out in late 2020. This is a consistent pattern, because white tea (of the kind that Li sources) is produced in very small quantities; most of her offerings are originally pressed in quantities of 2,000 or less. Since she herself is aging them to sell later, only a portion of those are available to us at any given time, and even those we have to share with other customers she has in China. It is not uncommon for a bing to be in plentiful supply one day, and someone buys the entire remaining stock the next. A recent upsurge in the popularity and market value of aged white tea has made it even harder to keep a particular vintage in stock.

Li reached out to me in early 2021 to let me know that she was releasing a full pressing of 2013 Gong Mei, totaling 20 Jian, with each Jian containing 48 cakes (6 tongs with 8 cakes each). She told us that we could get a price break if we bought it by the Jian, and that she anticipated all of them would be sold during the Spring Festival in a few weeks. We were able to secure two Jian of this tea, some of which we intend to set aside, releasing only a few each year.

Effulgence is a Gong Mei, a term that translates as "Tribute Eyebrow" and can refer to two things at different periods of time. Until the past few years, Gong Mei referred to a very high grade of Shou Mei, the late-spring harvest of white tea that is mostly leaves (as opposed to buds). Gong Mei has a higher bud content than average Shou Mei. A traditional term, it is vaguely defined and therefore not useful from a standards-setting perspective. A few years ago, the official designation of what Gong Mei means switched to something completely different: white tea harvested from Cai Cha, "Vegetable Tea", referring to tea that is not from cloned cultivars such as Da Bai and Da Hao (typically used for white tea), but from "wild" tea plants that grow naturally in the mountains without human intervention. These used to be used to make Red Tea.

Unlike the breeds Da Bai and Da Hao, they haven't been optimized for having large, prolific, and luxurious buds - they haven't been optimized for anything. Therefore it isn't possible to produce the pure bud (silver needle) and half-bud (white peony) grades of white tea using these Cai Cha plants, so to distinguish it from the more common forms of white teas derived from specific breeds, they repurposed the term Gong Mei.

In light of that, at the time when this tea was harvested and pressed, it was considered Gong Mei because it is a high grade, late-spring harvested white tea from the Da Hao cultivar with a profusion of downy buds. Essentially it is a very nice Shou Mei. Beyond the inherent quality of the starting material, the tea has been aged for 8 years in Li Yanmei's dedicated, cedar-lined, humidity-controlled storage room. The aging paradigm by which white tea appreciates in value is distilled in the adage "One year tea, three years medicine, seven years treasure."

We're excited to be able to share this remarkable tea. It is an amazing example of a well-aged, 7+ year white tea "treasure" cake. The full maturity of the cake results in a slow oxidation of the leaves, giving this tea a warm, rich, sweet character that is less dark than a Shou Mei. The bud-heavy composition of this cake lends a balanced clarity to the infusion with little to no tannic astringency. It exchibits notes of pine and cedar, clarified fermented berries and plums, and cured cannabis. The mouthfeel is viscous and sweet, and the Qi is evocative of golden light dripping down the body like thick icing down the side of a cake.

This sensation, which was palpable for us through every steeping of the tea, led to the tea being named Effulgence, a term referring to holy light emanating from a divine being. This year we plan on releasing one Jian of this tea - just 48 cakes. We will then release 4 cakes per year for the next 10 years.