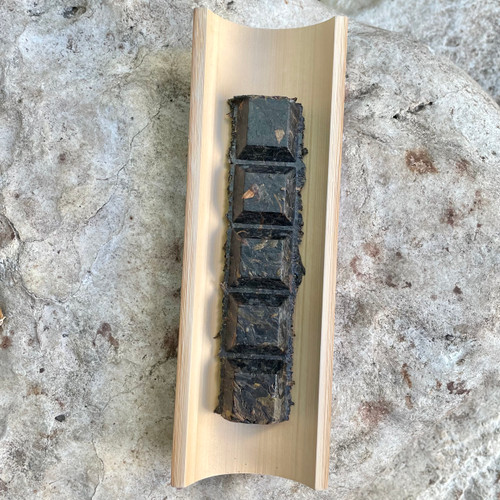 Chocolate refers to the shape of the brick, which is designed like a chocolate bar to allow for easy portioning. Flower refers to the grade of tea used: the second grade of Anhua Heicha, below Tian Jian but before Hei Zhuan/Black Brick, is called Huā Juǎn 花卷 (“Flower Roll”). It is traditionally dedicated to the production of pillars of tea wrapped in woven bamboo, but in modern times is frequently processed into smaller bricks called Huā Zhuān 花磚, meaning "Flower Brick." Flower Bricks are sometimes smoked with pine wood after pressing, as is the case with this one.

Dragon is the name of the brick. This tea was grown in a region called Jiǔ Lóng Chí 九龍池 ("Nine Dragon Pool"), and is therefore called “Dragon Brick." Technically we could have just translated the name as “Dragon Brick," but this is a somewhat common name for tea bricks, and this tea is anything but common.

As for the tea itself, it is a unique and outstanding Heicha (fermented tea) from Anhua, Hunan. A single section (roughly 6 grams) expands to be an abundant pot of surprisingly-whole tea leaves over the course of 12-15 steepings. It has a pronounced, but not overwhelming, smoky fragrance. It starts off crisp and sweet with a golden liquor, turning dusky and earthy as soon as the leaves open. Overall a very complex tea whose nuances play beautifully with the pine smoke.