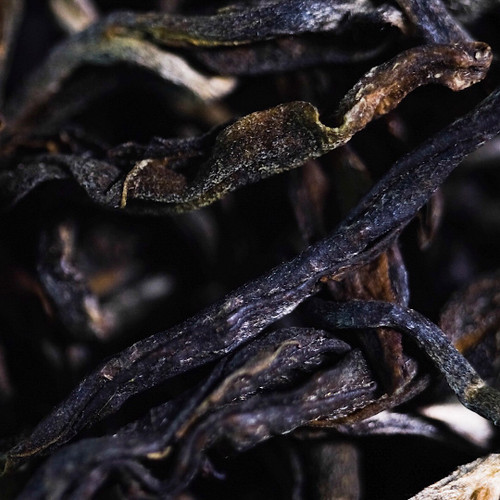 2018 Gu Shu Duoyi Village Sheng Pu'er (多依寨古樹茶, Duō Yī Zhài Gǔ Shù Chá, "Duoyi Village Ancient Tree Tea") - In the world of tea, Pu'er is highly prized. The most discerning connoisseurs tend to gravitate toward Sheng Pu'er, because it is representative of the unalloyed flavor of the tea plant, conveying both the character of the mountain and of the lineage of the plants themselves. Being minimally processed, and not fermented, there is nothing to cover up the inherent quality of the leaves. The most sought-after of Sheng Pu'er is sourced from trees of advanced age. Unlike oolong, which is grown from cloned cultivars, Pu'er plants are seed-propogated and can live for centuries. Tea trees are like vampires: the older they are, the more powerful they become. Ancient seed-propogated trees have deep roots that draw minerals up from beneath the surface, enriching the quality of the leaves. As the trees age, the resulting tea increases in Qi. The rarity of these trees, their relatively low yield, and the difficulty of climbing the trees in order to harvest the new growth made the effort of producing batches of tea sourced exclusively from ancient trees too costly for the Chinese economy to support until the last few decades. Despite this, they have long been treasured by tea farmers who would produce them in small batches for personal use or custom orders. Unfortunately, many venerable ancient trees were cut down because of their perceived worthlessness--the space taken up by one low-yielding ancient tree could be used to plant a dozen or more younger, more productive trees. Fortunately, the recent interest in and appreciation of Pu'er, both domestically and abroad, has led to the preservation of these valuable trees. Nannuo Mountain is known for having the highest concentration of ancient trees of any mountain in the Menghai range. Though it's impossible to truly know the age of one of these ancient trees, the oldest trees on Nannuo Mountain are estimated to be about 800-years-old. Ancient Tree Sheng Pu'er may be drunk fresh, or aged, being superior in flavor and Qi to younger Sheng Pu'er. Of the ancient arbors located on Nannuo Mountain, the Duoyi Village patch is the highest, with an altitude of around 1950 meters above sea level. It is famed not only for having some of the oldest trees on the mountain, but also for producing the sweetest tea. Of our single patch Gǔ Shù Chá, the Duoyi is considered the highest quality. Its flavor is sweet, bright, and clear with a broad-spectrum floral aroma and abundant sunshine-y Qi.