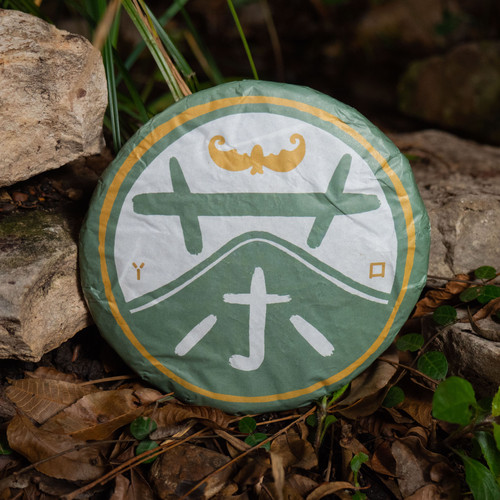 Gu Shu Yakou Village Sheng Pu'er Bing (丫口古樹生大餅, Yā Kǒu Gǔ Shù Shēng Dà Bǐng, "Yakou Ancient Tree Big Bing") - The nature of Sheng Pu'er appreciation emphasizes the Qi of the plant more heavily than the flavor or fragrance. As such, the most highly prized Pu'er comes from tea trees of advanced age that have had a long time to accumulate Qi. This is known as Gǔ Shù Chá 古樹茶 ("Ancient Tree Tea"). Because ancient trees are all genetically distinct, and also because they are rare, a given batch of ancient tree Sheng Pu'er would generally be sourced from a diverse assortment of related but not identical tea plants. In order to achieve a distinctive profile in tea made from these ancient plants, one must narrow their source material to plants growing in increasingly smaller patches. The Gu Shu Cha harvested from a single patch carries a more well-defined dì wèi 地味 ("earth taste") with each patch having its own unique attributes. When we first started getting Gu Shu Cha from Nannuo Mountain, we were only able to invest in the blend known as Immortal Dew, which is sourced from the Duoyi, Banpo, and Shitou patches. This was the least expensive option of Ancient Tree Tea, and it's what we used to introduce the concept to the Austin tea community. As the interest in Ancient Tree Tea grew, we started off by exploring, individually, the patches that make up Immortal Dew, acquiring Duoyi Gu Shu Cha, Banpo Gu Shu Cha, and Shitou Gu Shu Cha. New patches (or new to us, rather), such as Bama or Yakou, were introduced to us later, and this brought an exciting new dimension of Nannuo tea to the trio that we were already familiar with. Yakou struck me initially, and still does, as having the most crisp and citrusy character of all of the single-patch Gu Shu Chas that we get from Nannuo Mountain.

This standard size bing includes 357g of pressed tea. The base color of the wrapper is green, indicating that it is a Sheng Pu'er. The ring and bat are gold, indicating that this tea is made from Gǔ Shù 古樹 ("Ancient Tree") leaves.